A new look at the Columbia River Crossing: The Smart Alternative

Plan “B” A new look at the Columbia River Crossing 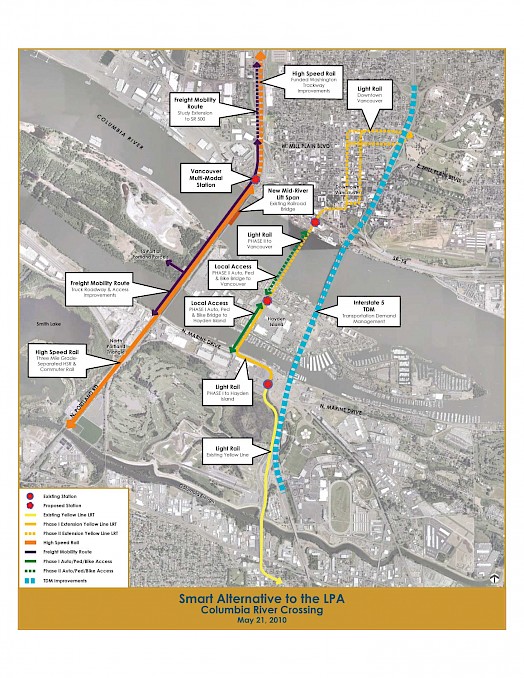 It is time to stop this million-dollar a-month madness. The time has come to recognize that the I-5 freeway over the Columbia River will never carry another 50,000 vehicles a day and still manage to meet greenhouse gas reduction goals set by the city, state and nation. The myth of 15-hours-a-day of traffic congestion perpetrated by the Washington and Oregon Highway Departments is a disingenuous scare tactic to promote this ill-conceived project. It is based on the ridiculous assumption that nothing can be done to stem the tide of runaway commuter traffic and the only solution is to accommodate it with more freeway lanes. Non-freeway solutions were never seriously considered.

I-5 is a six-lane freeway. The existing structurally sound bridges can accommodate all six lanes if it were not for the morning and evening surge of commuters who are left with no alternatives other than their private automobiles to get to and from work. Without this surge the number of rear-end collisions, the major incidents on the bridges, would be greatly reduced. Trucks would have plenty of room if commuter traffic were reduced; a 10% reduction in auto traffic would double the road capacity for trucks. Bridge failure in the event of an earthquake is another scare tactic. There is no evidence that these bridges are more likely to fail in an earthquake than any of the other 16 major bridges in the Portland metro area.

A bridge on the scale of the new Sauvie Island Bridge could connect Hayden Island to Marine Drive. This would reduce traffic congestion at the Marine Drive – I-5 Interchange and provide Hayden island residents with alternative access. The Sauvie Island Bridge was built two years ago for about $45 million; roughly half the amount already spent studying the CRC.

The MAX Yellow Line can be extended to Hayden Island, a Portland Neighborhood, independent of the freeway and the wishes of Clark County voters who may opt for BRT.

Replacing the old swing-span on the freight railroad bridge with a new lift- span, aligned on the river with the “hump” of the I-5 Bridges, would eliminate most freeway bridge openings.

Fast, frequent direct passenger rail service between transit hubs in Vancouver and Portland would greatly reduce congestion on I-5. Currently this is not feasible because of heavy freight traffic on the existing railroad bridge and at the North Portland and Vancouver Junctions. The Obama administration has proposed that frequent, fast passenger rail service be established in the “Northwest Cascades Corridor” between Vancouver BC and Eugene. A new high-level passenger rail bridge over the Columbia River in the vicinity of the existing Freight Rail Bridge will be required. A passenger rail bridge is far more likely to be designated a “Project of National Significance” and receive federal funding than a freeway expansion project which would further our addiction to oil. This is especially true given the disaster in the Gulf of Mexico.

If the bridge is constructed to accommodate local traffic on a second deck, it could allow trucks going to and from the Rivergate Area to bypass the congested northbound on-ramp to I-5 from Marine Drive.

Local traffic, transit, bicycles and pedestrians would no longer be forced onto or next to the freeway in order to cross the Columbia River. Construction costs and traffic disruption could be kept to a minimum because the freeway would not be affected and no bridges would be demolished. It could also serve the “Boise Cascade” development site.

HOV lanes, ramp closings, and tolling during peak hours could also be effective tools to reduce congestion because alternatives to driving would be available.

7. Operational changes to the transit systems

Both TriMet and C-Tran need to coordinate and aggressively upgrade their systems. Bus routes should feed rail service as well as each other in a single multi-destinational transit network that provides fast, frequent and reliable access to all parts of the metropolitan region.

These non-freeway alternatives would reduce traffic congestion, traffic incidents, construction problems, vehicle-miles-traveled and greenhouse gas emissions at a much lower cost than the replacement bridge and freeway expansion proposal.

It is time to go back to the drawing board.